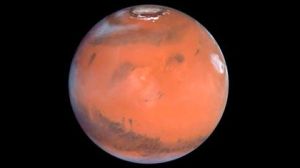 China’s Jade Rabbit Moon Rover may have touched hearts around the world…now the Americans are taking the next step in the space game. The USA’s MAVEN robotic probe may not have the personality that made Jade Rabbit so popular, but its mission is no less important. The probe completed final braking on Sunday to slide into its orbit around the red planet. The plan is for MAVEN (Mars Atmosphere and Volatile Evolution probe) to examine the planet’s upper atmosphere in order to help us understand how the solar wind has been stripping away atoms and molecules for ages.

MAVEN looks to turn back the clock and give us a glimpse into the deep history of our nearest neighbor. Perhaps helping us see what it used to look like and where all its water went…

Check out the full story: